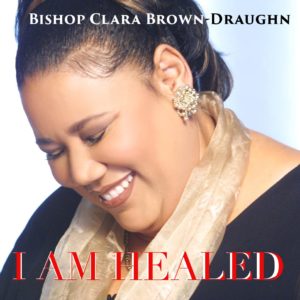 (Detroit, MI) – May 8, 2017 – Bishop Clara Brown-Draughn is a walking miracle. Defying multiple doctors’ diagnoses, she has been hit with more health challenges than the average human being. But the singer, songwriter and pastor’s faith in God has never waned. A gifted vocalist, she has sung with Gospel greats such as Rance Allen and Shirley Caesar. The leader of True Love Evangelistic Ministries in Detroit, MI, Bishop Clara is called to inspire others through the ministry of music and the preached word. She will be inspiring even more people with her brand new single, “I’m Healed.” A spirited ballad, the song was just released and is available on iTunes, Amazon, Google Play and other digital music outlets.

The new track, “I Am Healed,” is a musical testimony for the artist. Sung with a conviction that can only come from someone who is well acquainted with the lyrics, “I Am Healed” is one of the many songs that the Bishop has penned. It’s perhaps one of her most personal songs to date. She says, “I went to the doctor one day and he had some negative things to say about my health. I rebuked him and said that I would outlive him,” she recounts. That same evening she was at church and heard her grandson playing the piano. At that moment, the words “I Am Healed” dropped in her spirit. She says, “I began to sing the word of God: He was wounded for my transgressions, He was bruised for my iniquities, the chastisement of His peace was upon me, and by His stripes, I am healed.”

Bishop Clara Brown-Draughn knows God as Healer. In 1986, she had an accident which resulted in a spinal injury. She experienced paralysis on her left side and was told she would never walk again. God had other plans and at a Benny Hinn Crusade several years later, she was prayed for and ultimately stepped from a wheelchair which had been her mode of transportation for seven years. In 1998, she was diagnosed with breast cancer and given only six months to live. Although many told her to undergo radiation, chemotherapy and surgery, she obeyed the word she received from the Lord and decided not to move forward with any medical procedures. Once again, God healed her. The cancer disappeared, and 19 years later, it has not returned. But that was not the end of her bout with illness. In 2004, she tested positive for a heart attack. As the doctor was planning to put a stint in her heart, the blockage that was previously there was suddenly gone. The doctor exclaimed, “Young lady, your heart is perfect!”

A church girl, she was practically born between the pews. One of eleven children, she began singing as a youth. Music wasn’t just a talent for her; it’s always been ministry. Hailing from a family of pastors, preachers, and street evangelists, she learned the word of God while growing up in Knoxville, TN. Later, her family moved to the Motor City, where she began preaching and pastoring. She sees her church, True Love Evangelistic Ministries, as a filling station for believers. A favorite in Detroit, she had a daily radio broadcast on the city’s WEXL 1340AM which ran for seven years. She has been seen on the TCT Network, the IMPACT Network and Rejoice In The Word on The Word Network. She will be making another appearance on the TCT Network on Celebrate Live on Thursday, May 11th at 8:00 PM ET. Those in the Detroit area will be able to see it live; it airs on Saturdays at 8:00 PM ET in other markets. For more information on Bishop Clara Brown-Draughn, connect with her on Facebook.